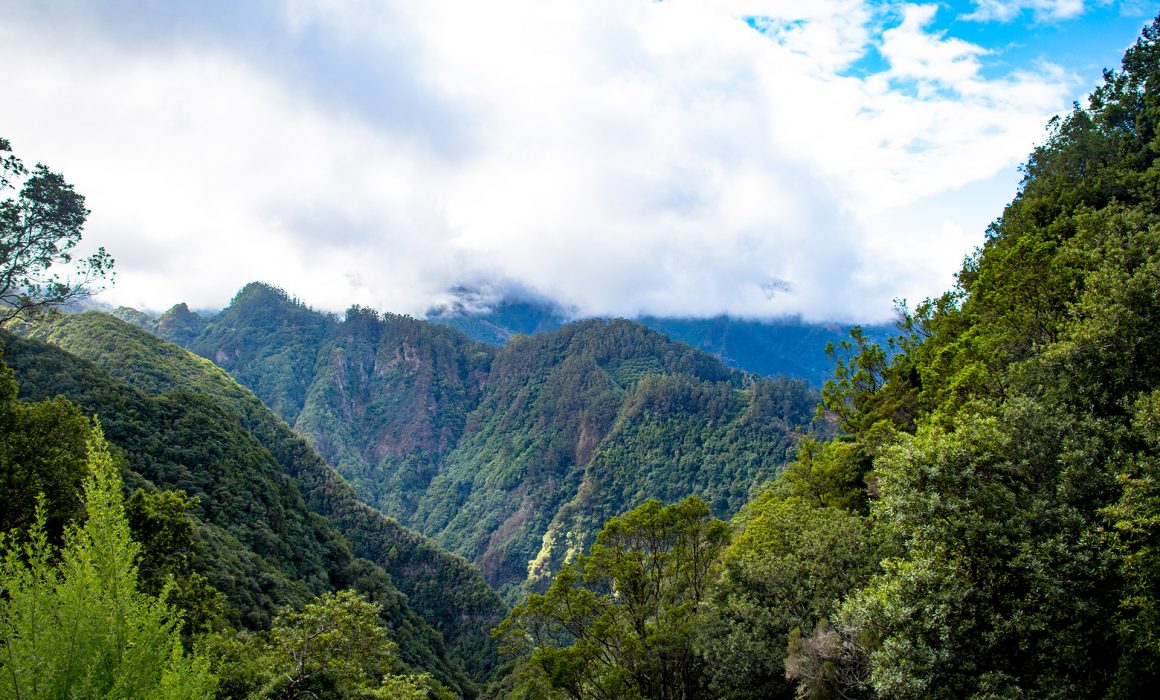 After a solid 11 hours of sleep, we woke up to an incredible view over the central massif of Madeira.

We had a small breakfast before we continued towards Casa das Funduras. A few steps lead us up to the house, which gives support to the forestry activities in this area of Madeira. A few benches invite you to relax and appreciate the great view over Madeira. 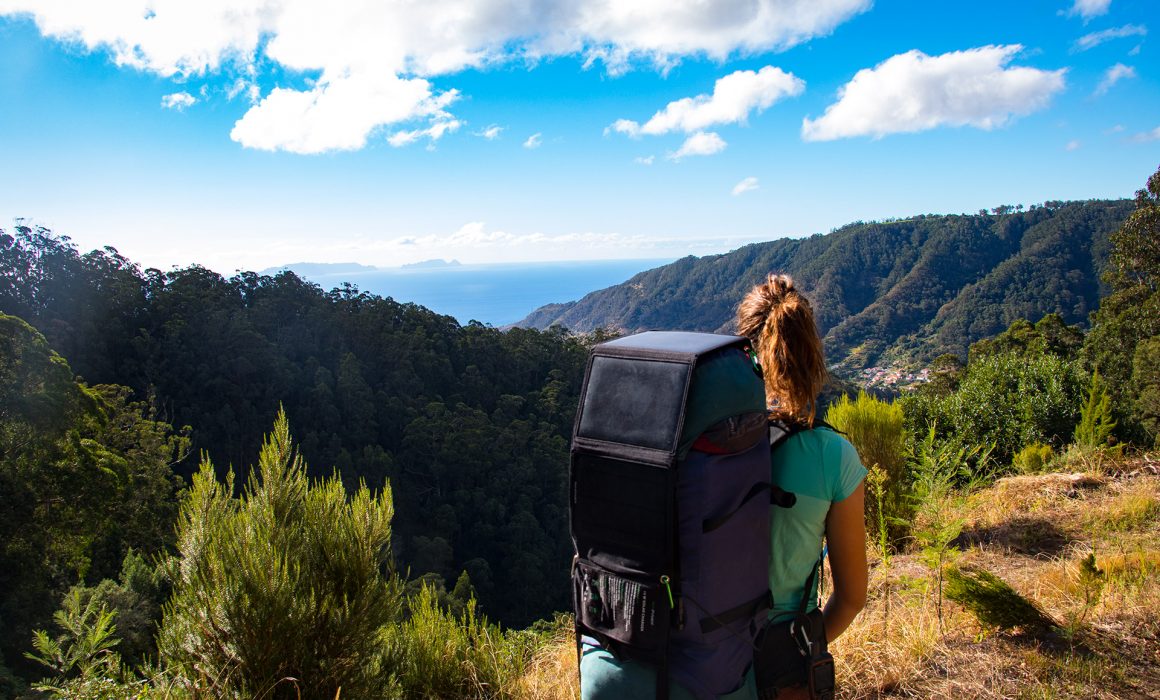 We followed the path to the left. We admired the extraordinary beauty of the endemic flora and fauna of Madeira Island. The greenery of the trees and vegetation, the melodious singing of birds and the whole environment make this walk almost magical and unrealistic. 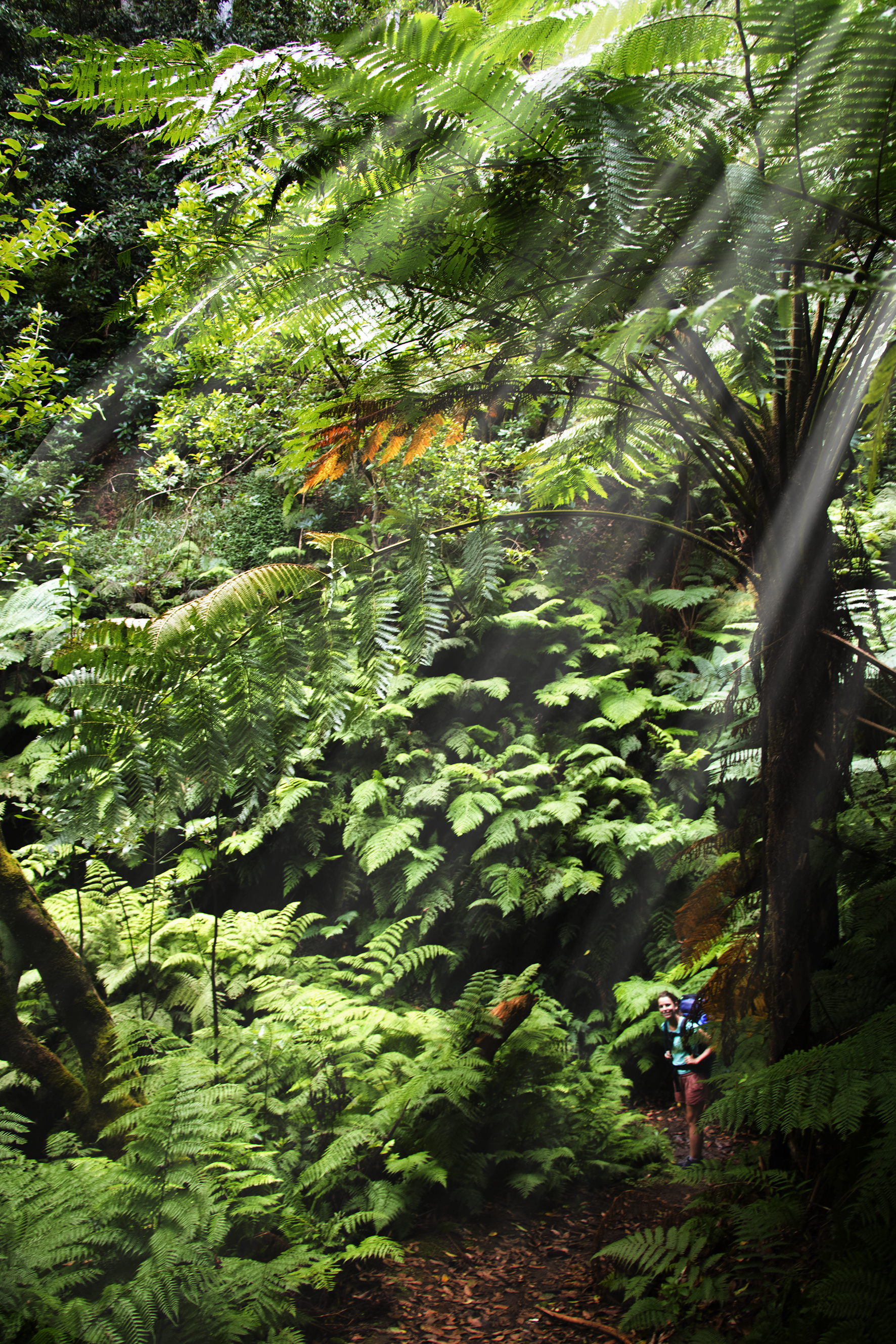 Next to the trail grow tree ferns which can rise to 10 m. By far the biggest ferns we had ever seen.

The next 7 km went by super quickly. It was a constant up and down. Besides a few runners – the path is part of a 35 km long trail running network – and a French couple; nobody was overtaking us. The last 2 km of the trek to Portela is on a forest road with great views towards the north coast of Madeira. 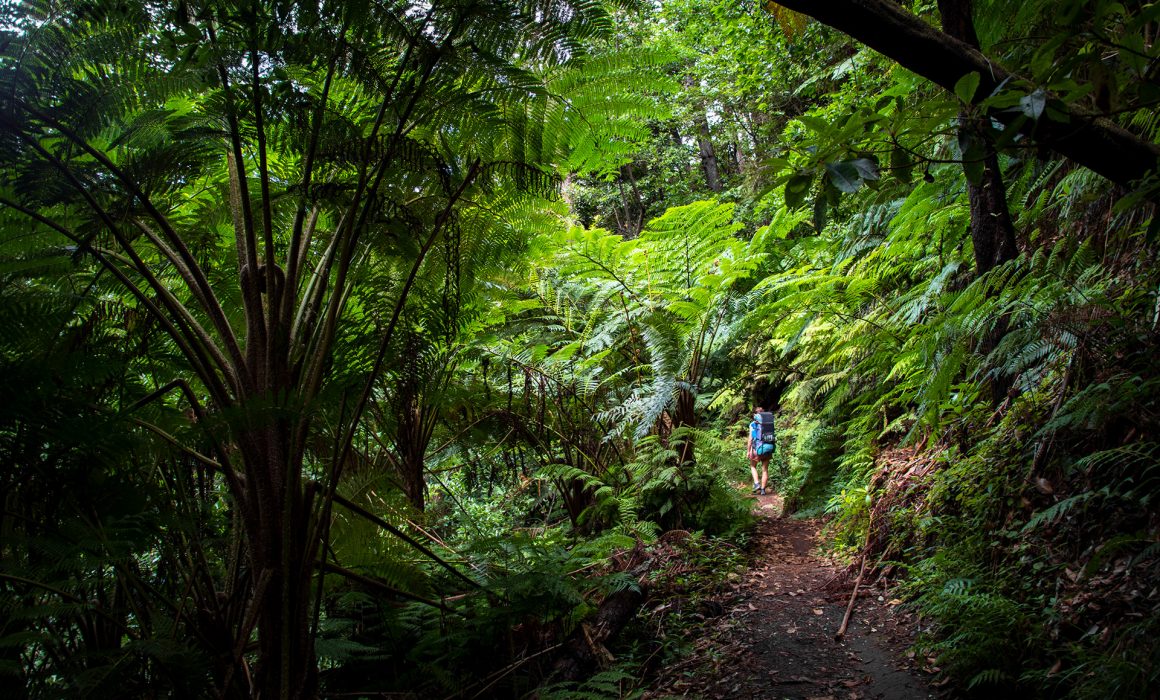 Arriving in Portela, it was time for a small snack. We both ordered the Acorda soup. A traditional bread and garlic soup with an egg and a lot of olive oil, some chips and two coffee (12 €).The Restaurant had a fantastic view; the food wasn’t as great. There is another restaurant just a few meters down the street, which might be better. 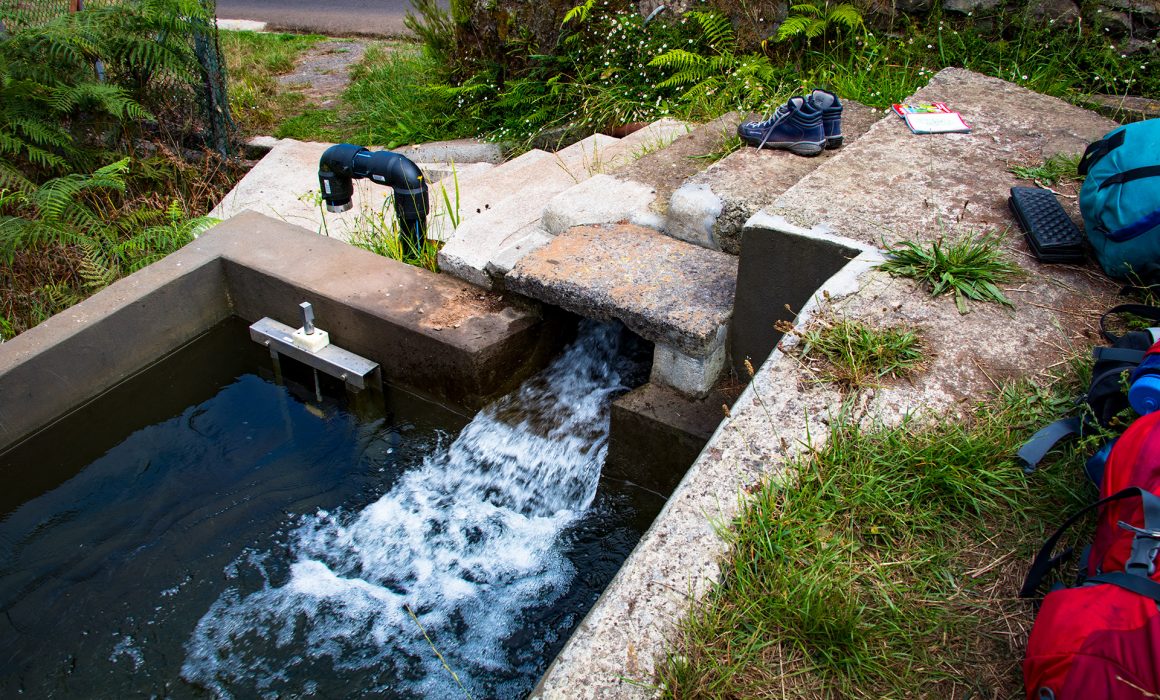 Now it was time to tackle the gas problem. Bella sacrificed herself and waited with our backpacks. I was allowed to run downhill and search for some gas. On the way down, I asked everywhere. Everybody was super helpful and pointed in different directions. The way down was easy, but as soon as I reached the bottom of the valley – still without gas – it was time to run uphill. After a long and cruel climb towards Santo Antonio da Serra, I finally reached the top of the hill.

I was sweating like hell, and my heart was going crazy. With no time to enjoy the beauty of Santo Antonio da Serra, I stopped at a small shop, close to the church – no gas. The owner pointed to the north and said that there might be a petrol station. At this stage, I gave up, because I was already gone for an hour. So I took the taxi to the petrol station, but again no gas. The cab driver was accommodating. On the way, he was constantly on the phone. It was unclear to me if he was helping me or just ignoring me. After a small stop at the next store, we drove to a hardware store, which was closed on Sundays. He managed to get the manager on the phone, who arrived a few minutes later. He had to disable the alarm and then opened the shop – just for me. 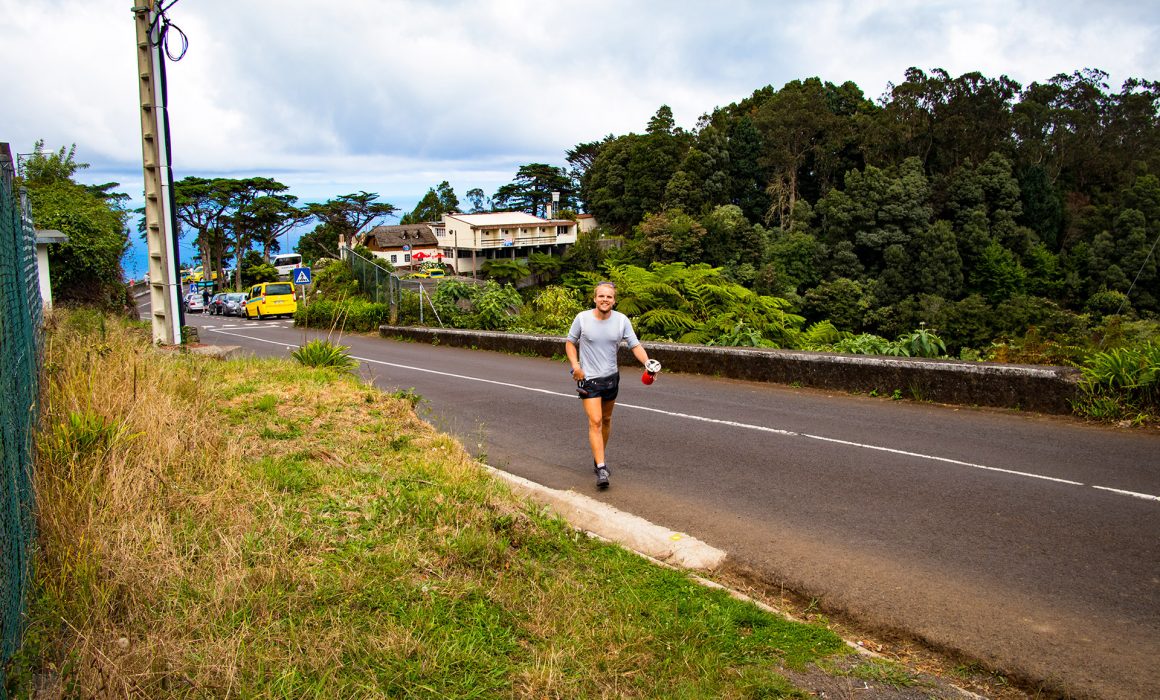 Finally a gas cooker with gas… It wasn’t the best cooker, but that didn’t matter at all. Thank you Madeirans, you are amazing. With the gas in my hand, I felt like a hero who just won an Olympic medal, in cross-country-gas-shopping.

Arriving back at Portela, we immediately continued towards Ribeiro Frio. The taxi driver warned me that we still have a 30 min walk uphill and another 4 h to Ribeiro Frio. The Ascent wasn’t that bad, and we quickly arrived at a small water basin, where a picnic area welcomes passing trekkers. The path suddenly narrowed. On the left side, we had a fantastic view towards the Atlantic Ocean. 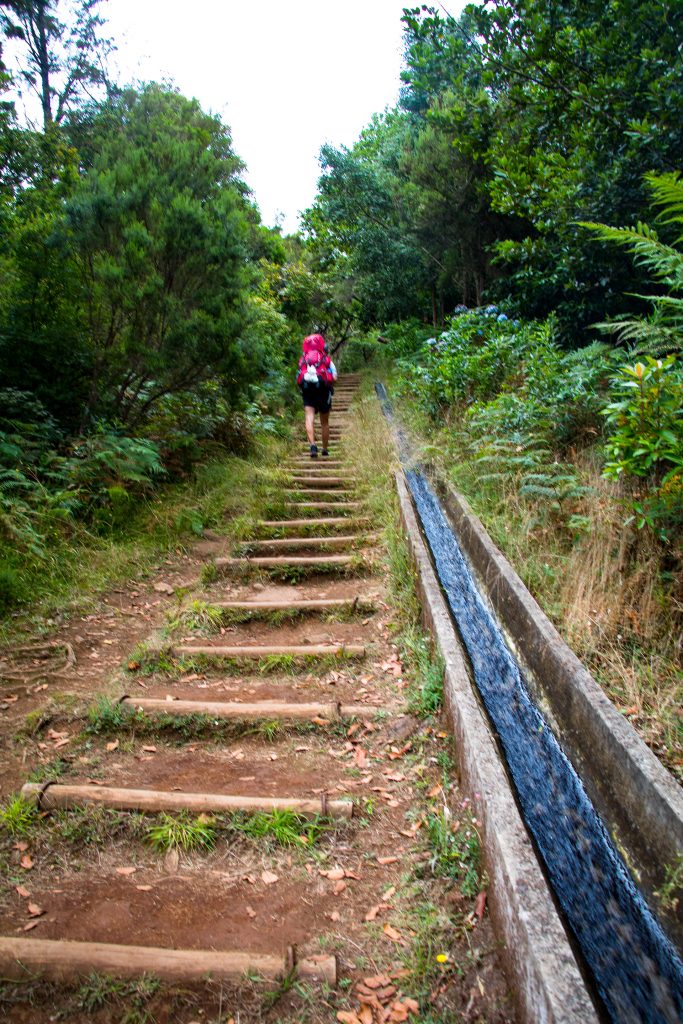 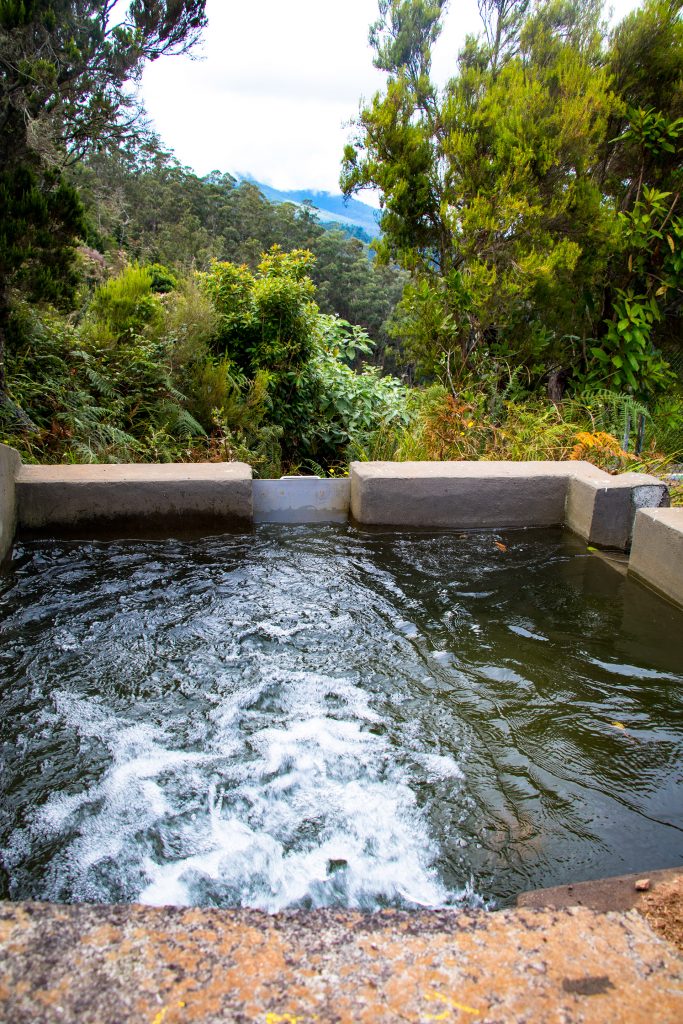 We followed the Levada for another 6 km. It was getting tight and there was nearly no space for our huge backpacks. No wonder, that the trek is closed after rain and during the winter season. Steep drops and a super narrow path make it nearly impossible to continue walking. The rails are not looking safe at all, but the views towards the ocean are fantastic. 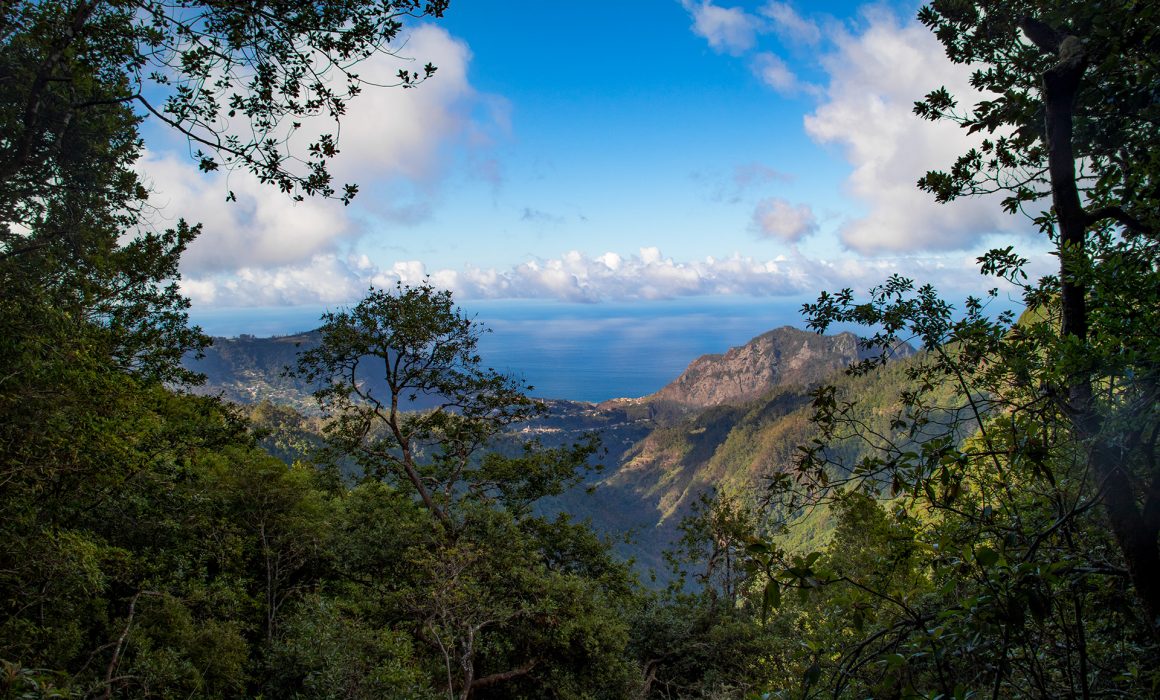 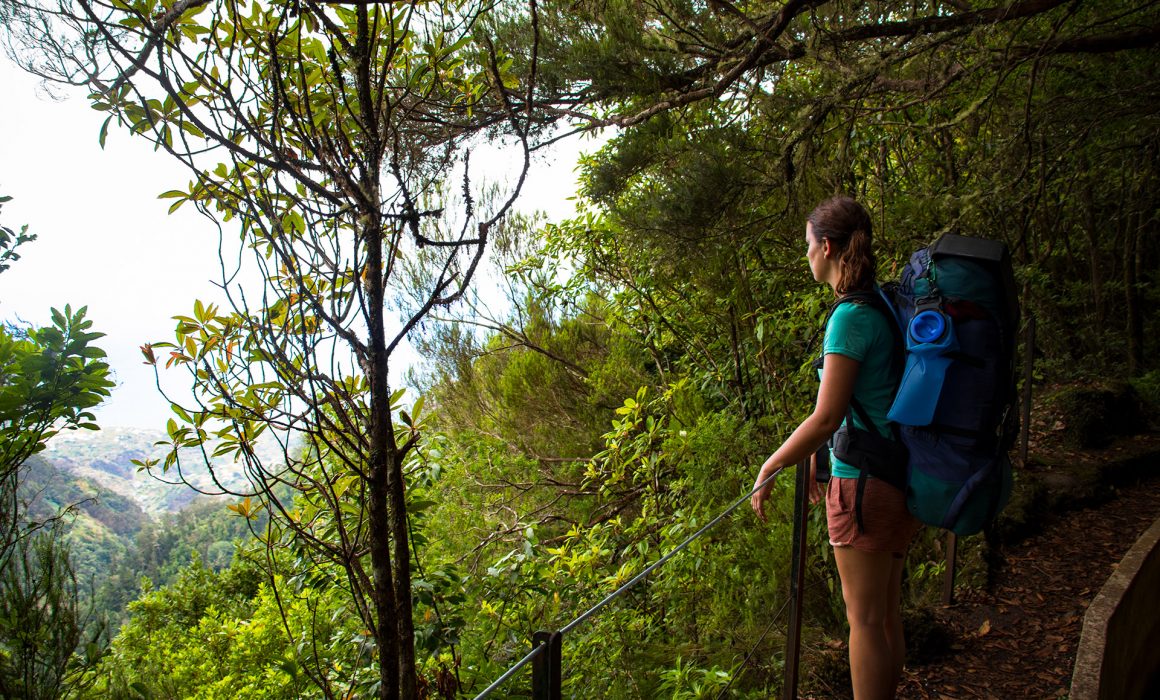 A water bottle slipped out of my backpack and landed next to the path. Just one meter deeper but hard to reach. I tried to catch the bottle with my legs; my heart was raising. When I finally got it and stood up again, I realized how stupid I was. Considering the particular dangerous spot, it was more than reckless to save that water bottle. 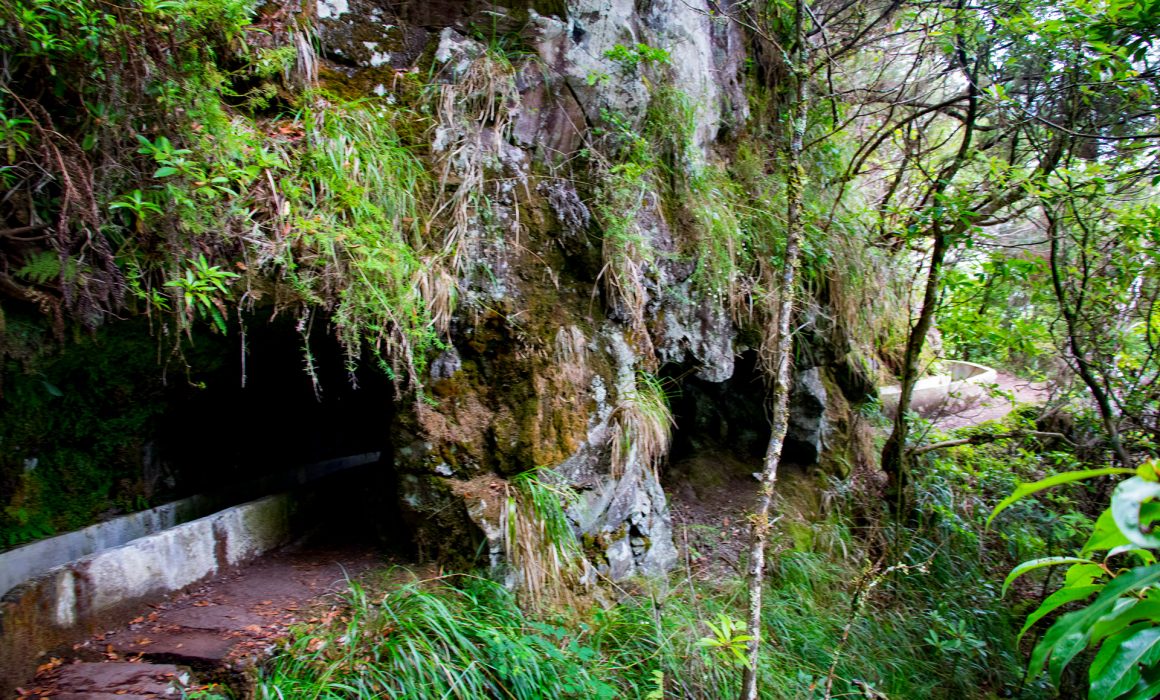 We both were super happy as the path opened up again and the steep drops ceased. At this point, our feet felt wobbly. We could feel every stone through our trekking shoes. Still unsure where to sleep, we continued walking. 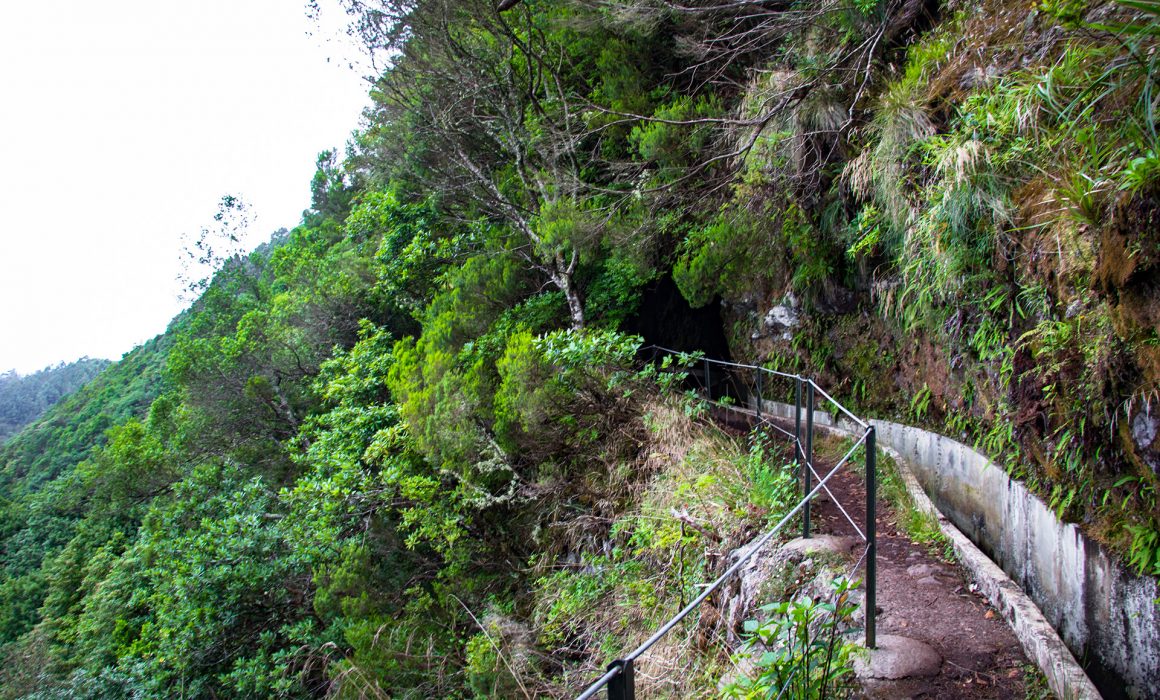 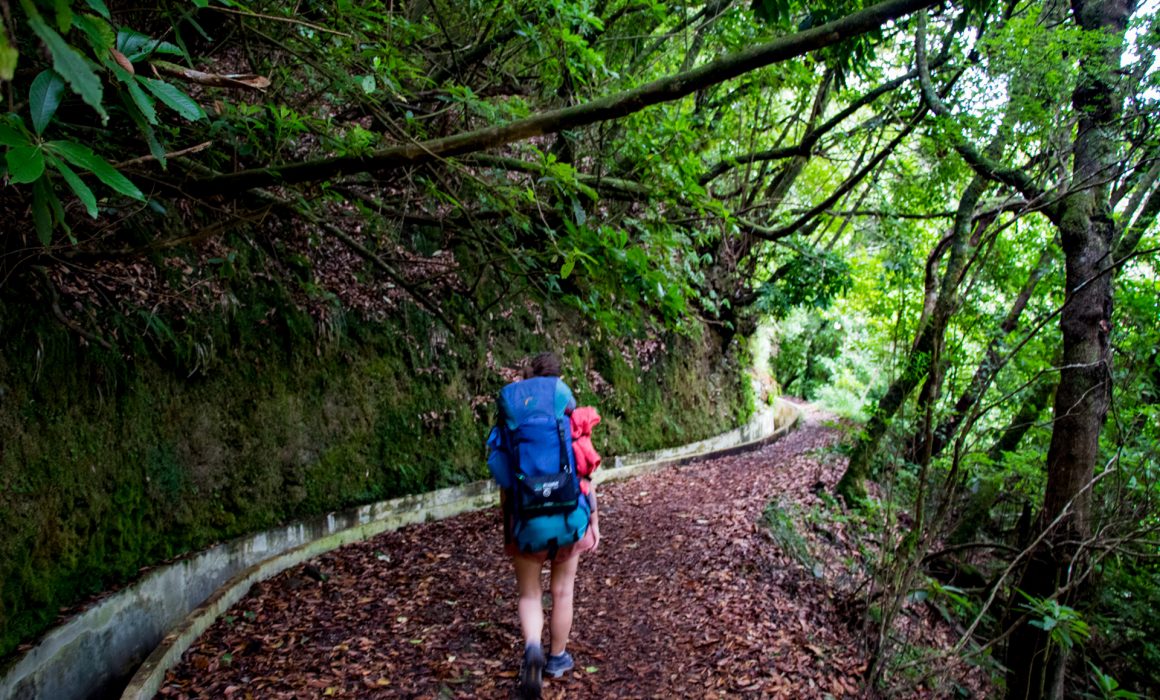 A few minutes later, Bella spotted a clearing close to the path. Far enough, to not being spotted from other hikers. The perfect place for the night. After pitching the tent, we washed our clothes in the Levada and finally had some warm dinner. We were exhausted, so tired, that we decided to let the rice cook over night (off the cooker and under the blanket). 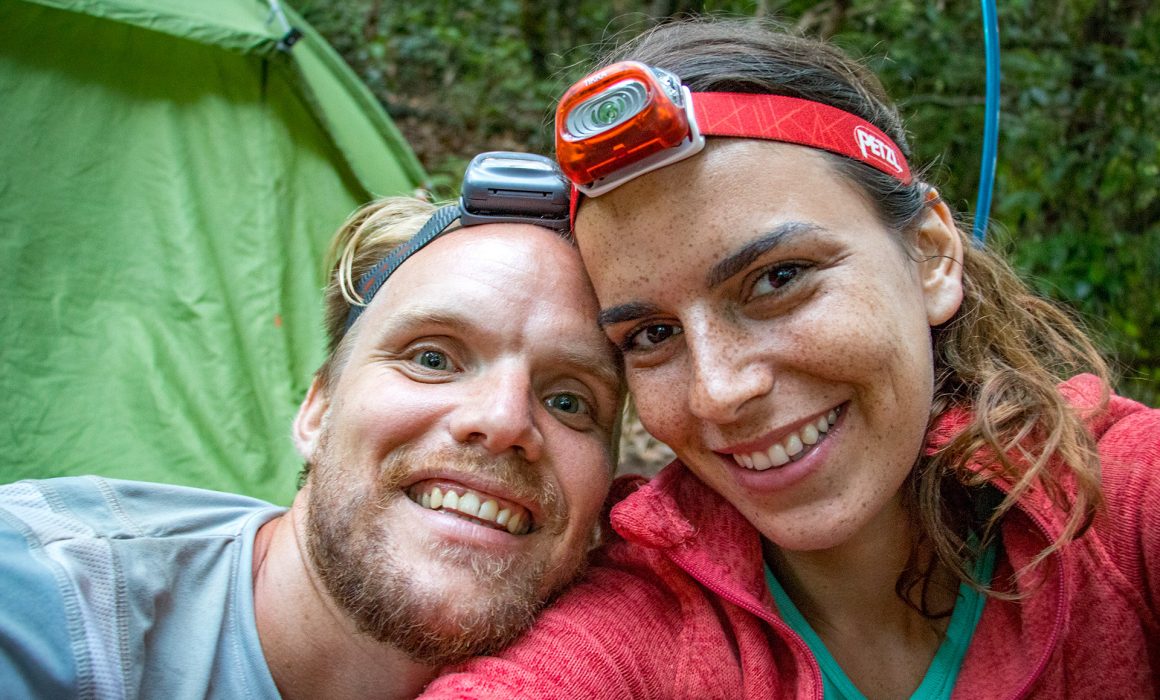 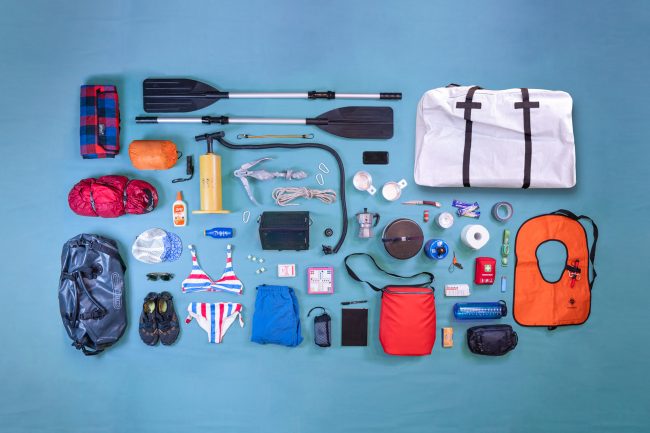 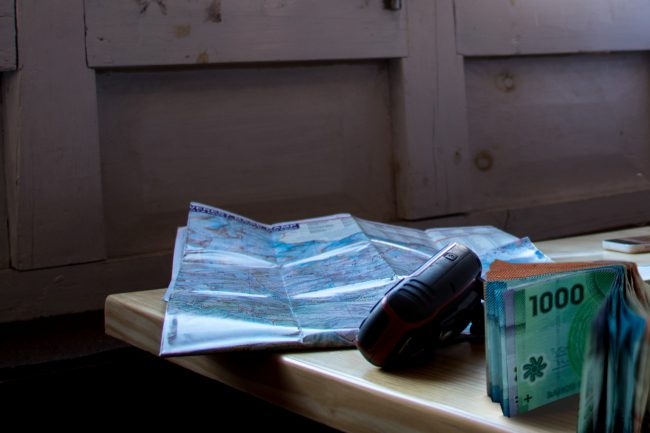