The most southern trek in the world – Day 1

The most southern trek in the world – Day 1 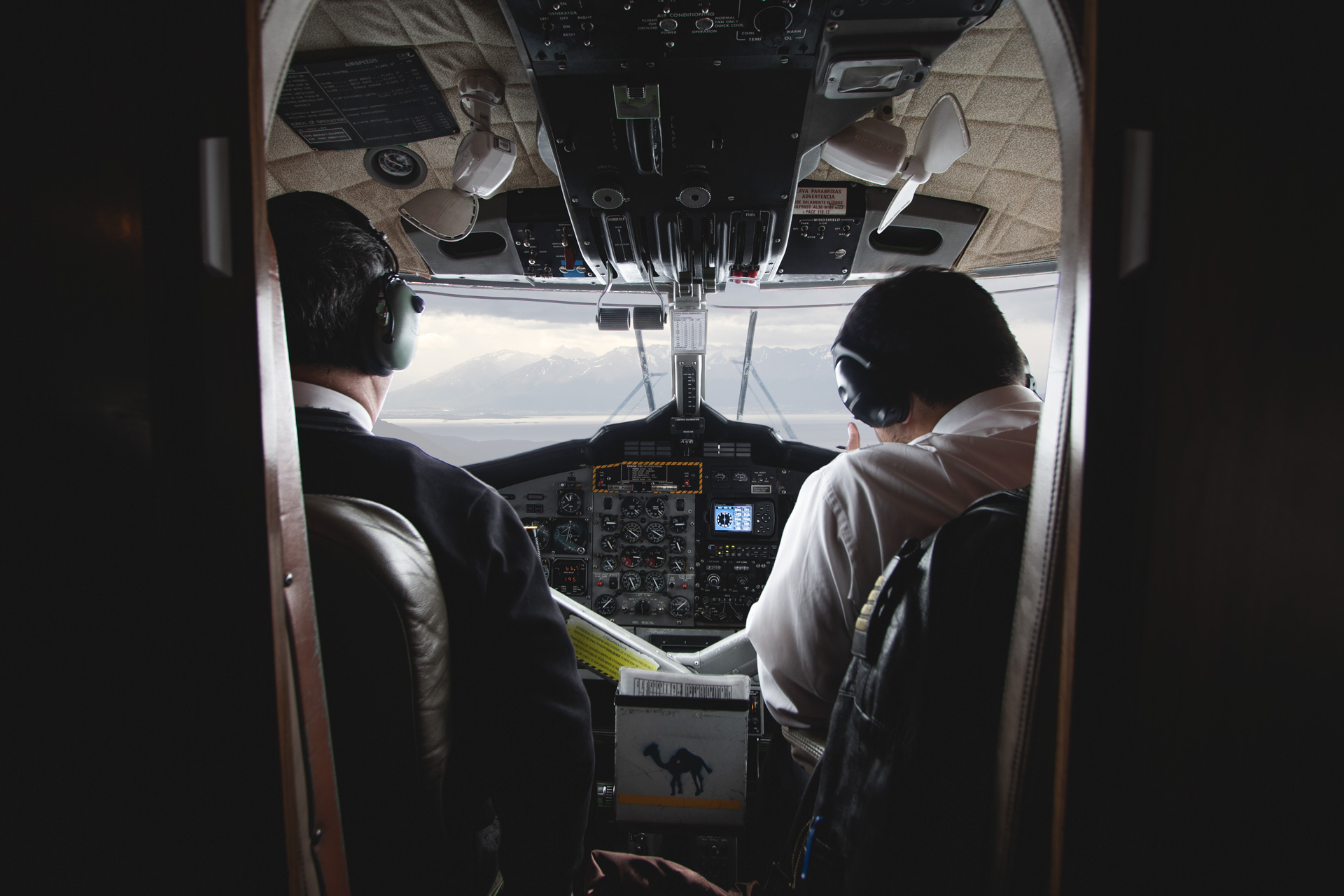 Today we took the taxi from the city center of Punta Arenas towards the nearby airport. From here a small twin-engine twin-otter brings us to the starting point of the Dientes de Navarino circuit: Puerto Williams. Puerto Williams is the capital of the Chilean Antarctic Province and the world’s southernmost city with a population of about 2,300 inhabitants.

The Dientes de Navarino massif is not just part of the southernmost trekking route in the world, but one of the last great outdoor experiences on this planet.
The extreme isolation of the Isla Navarino gives you the chance to spend a few days alone in stunning natural surroundings without the influence of mass tourism. Not entirely alone, of course: beavers, eagles, condors or guanacos turn out to be quiet and pleasant traveling companions.

Overall, there are more than 120,000 beavers on the island, as larger predators do not threaten the shy rodents. With their many dams, the Beavers put entire areas under water which from time to time can be quite helpful while crossing a river.

However, the Beavers have a severe effect on the entire ecosystem of the island. Introduced initially from Canada to Argentina in 1946, the idea was for the rodents to breed and start a fur industry at the end of the world.
The pons and lakes created by the rodents may look pretty, but they change the ecosystem of Isla Navarino. (Don’t drink water out of beaver ponds.)

Puerto Williams is the last point where you can stock up on groceries (soups, noodles, bars, fruits, etc.) and other useful items (batteries, gas cartridges, etc.) before starting the trek. 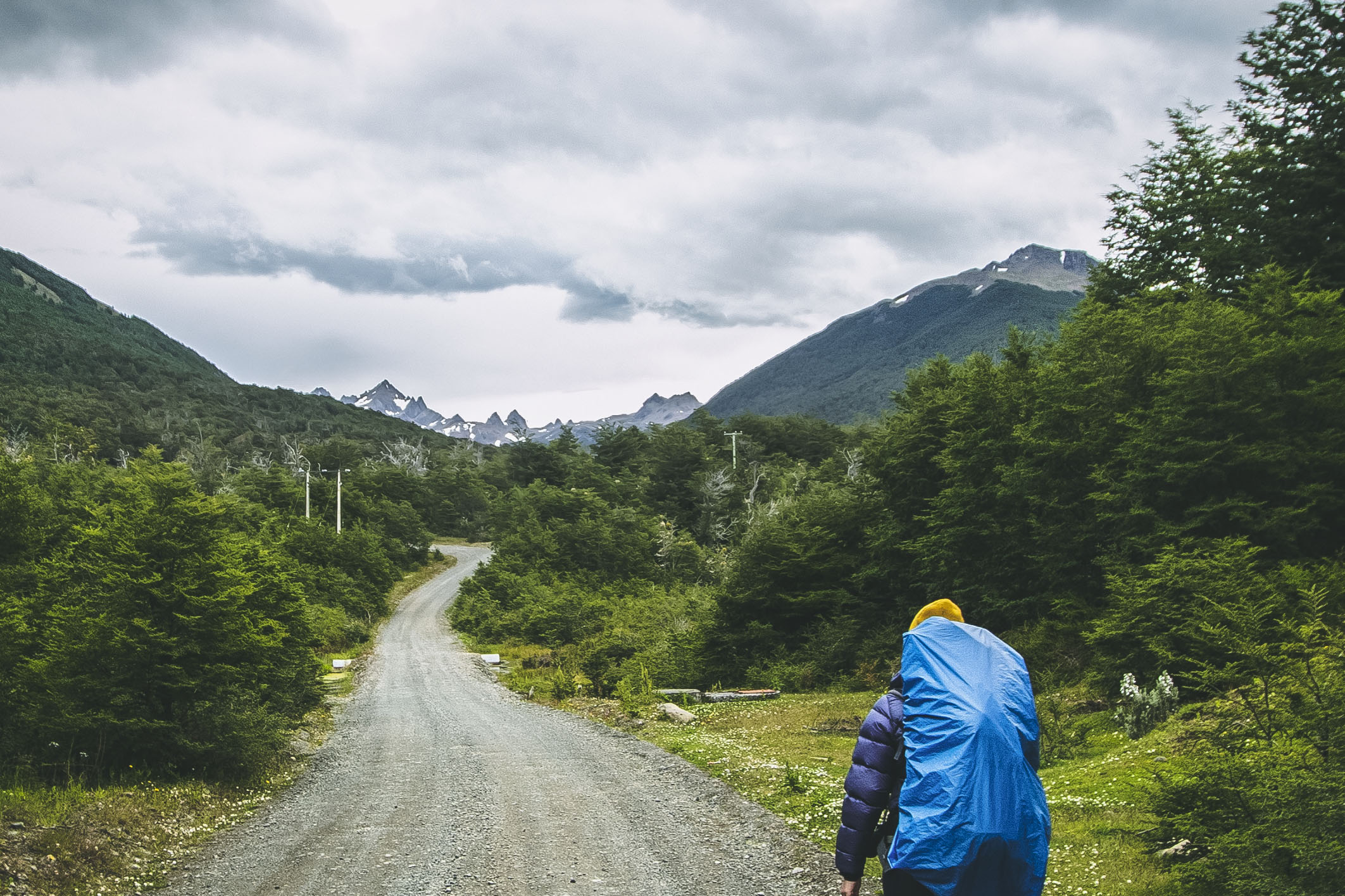 You exit the town on the road towards the airport when you reach the Plaza de la Virgen turn left and follow the dirt road till you reach a waterfall and small hut. It marks the entrance of the Dientes de Navarino (Hito 1). There is a hidden camping spot right at Rio Robalo next to the trail.

The beginning of the trail was completely redesigned in 2012. From the waterfall, we follow the nature trail up to the Cerro Bandera. (There is an alternative route towards Laguna del Salto which is less demanding.) 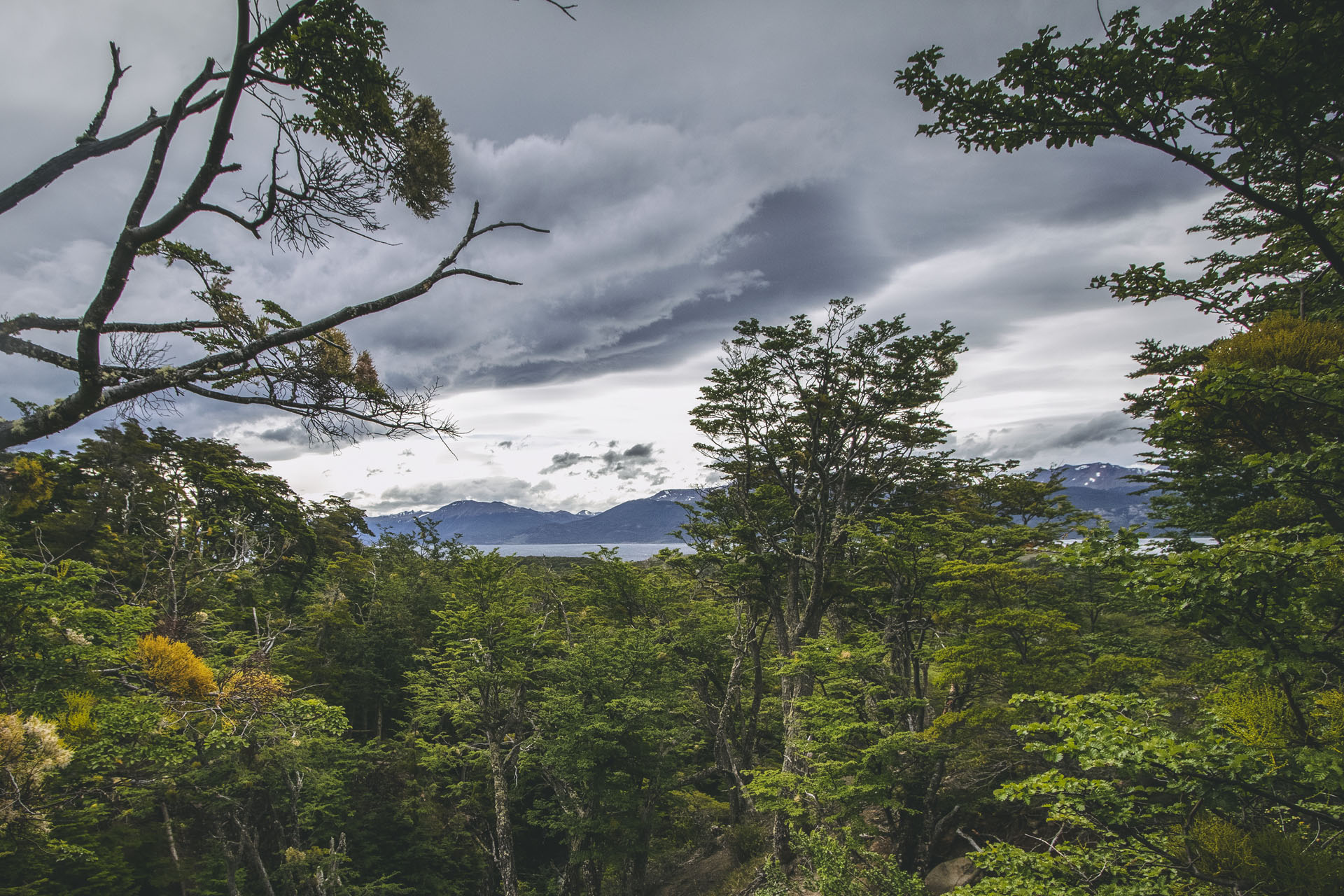 The forest groans and croaks under the strong arctic wind, it is a scary venture up to Cerro Bandera. The path turns left and (Hito 2) gets smaller and smaller the higher you get. On the way up we encountered a dead cow which was hit by an overturned tree, the smell followed us up the hill for the next few hundred meters which didn’t make the climb any more comfortable. 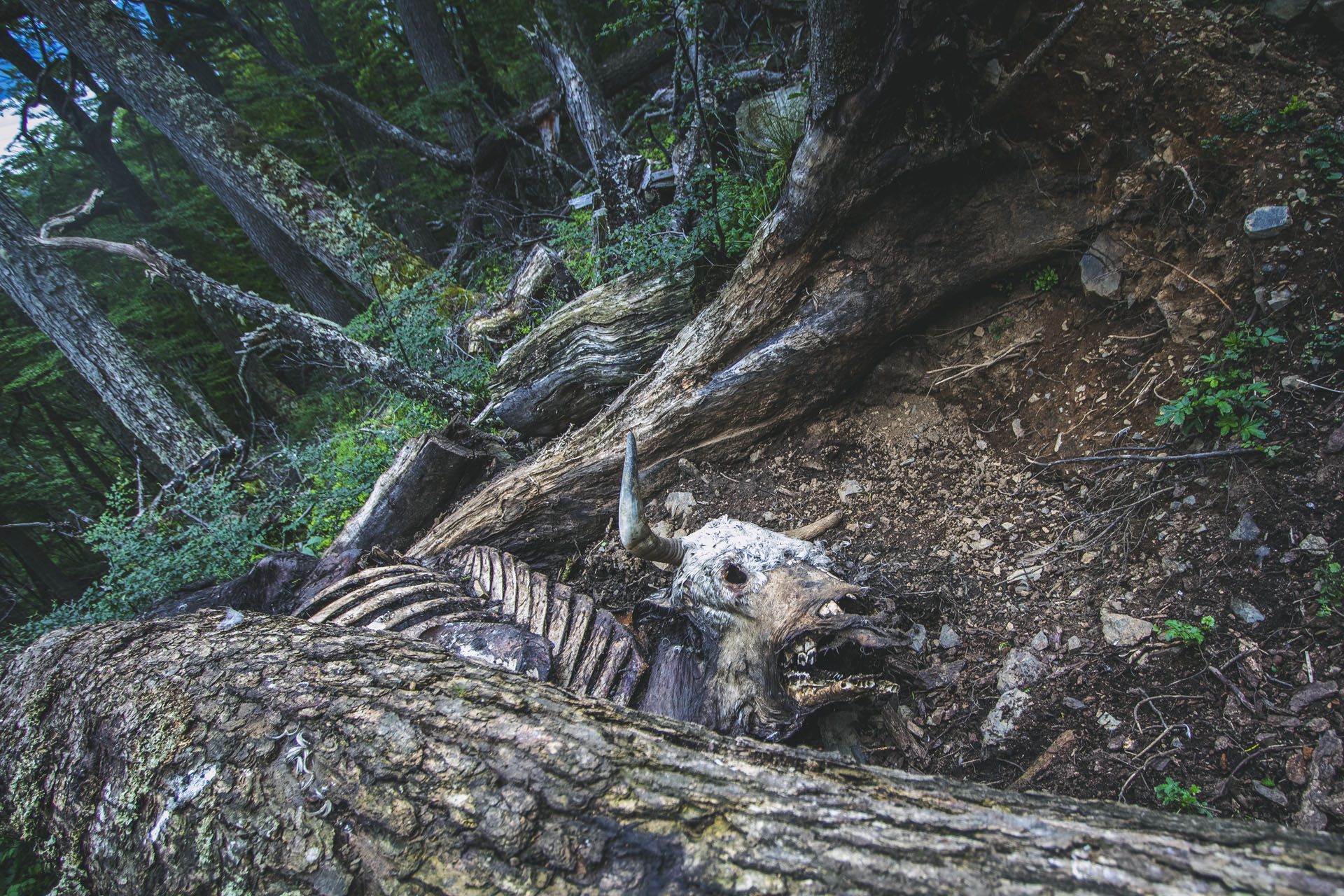 After about 2 hours of climbing over trees, walking through muddy soil, the Antarctic beech forest finally thins. We cast a glance at the Beagle Channel and Ushuaia in the far west: a majestic view over glaciers and vast mountains (Hito 3).

This is the Patagonia we have dreamed about for so many weeks. Not at all comparable to the crowded treks in Torres del Paine National Park.

We felt small and fragile in this harsh environment formed over centuries by strong winds and cold days. 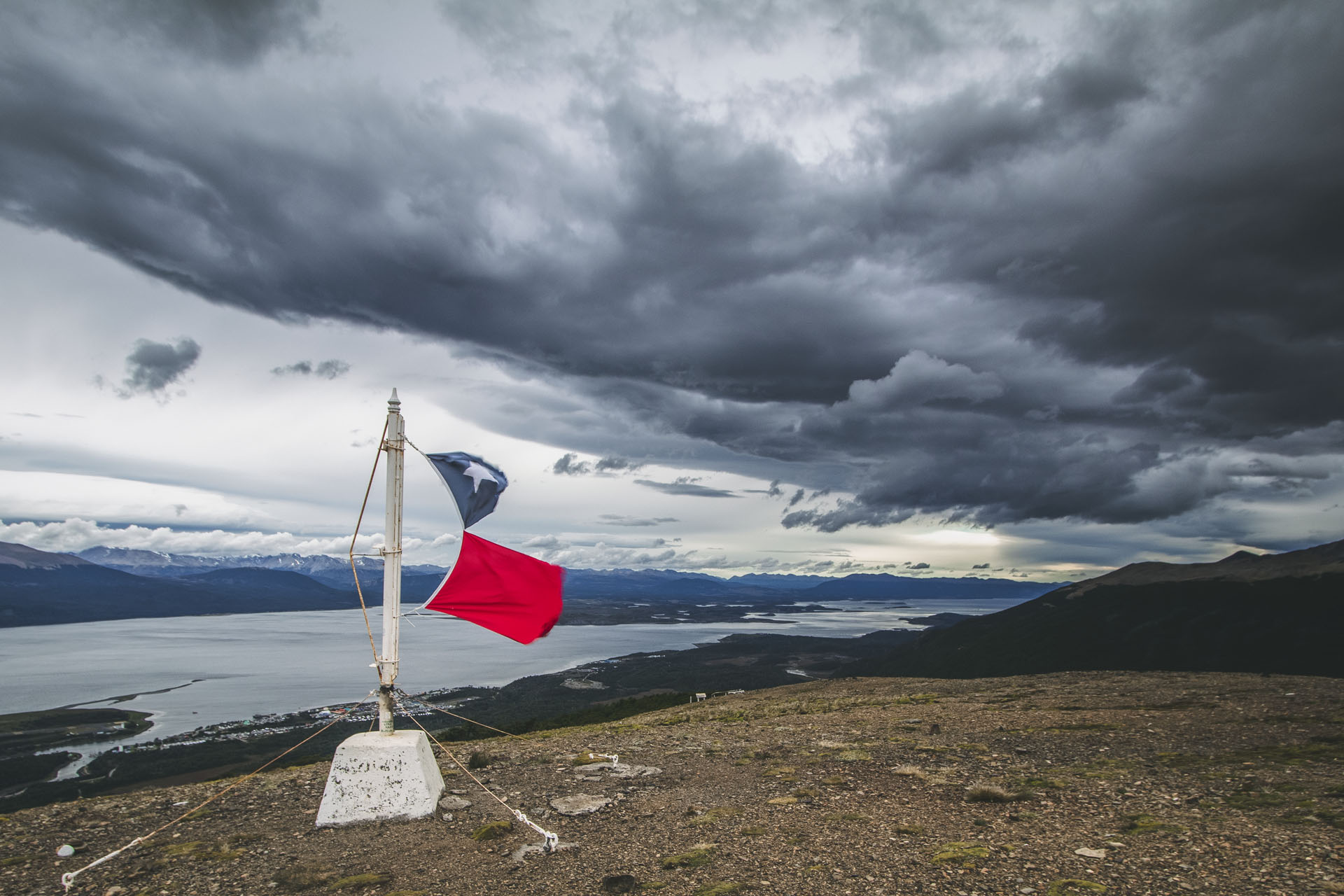 The howling of the icy winds followed us towards the top of the mountain. (Hito 4)

While adjusting our rain covers, we found our tent pegs in one of the pockets. I previously asked a welder in Puerto Williams for some reinforcement steel as tent peg replacement for our tent, which added another 500grams to the backpacks. 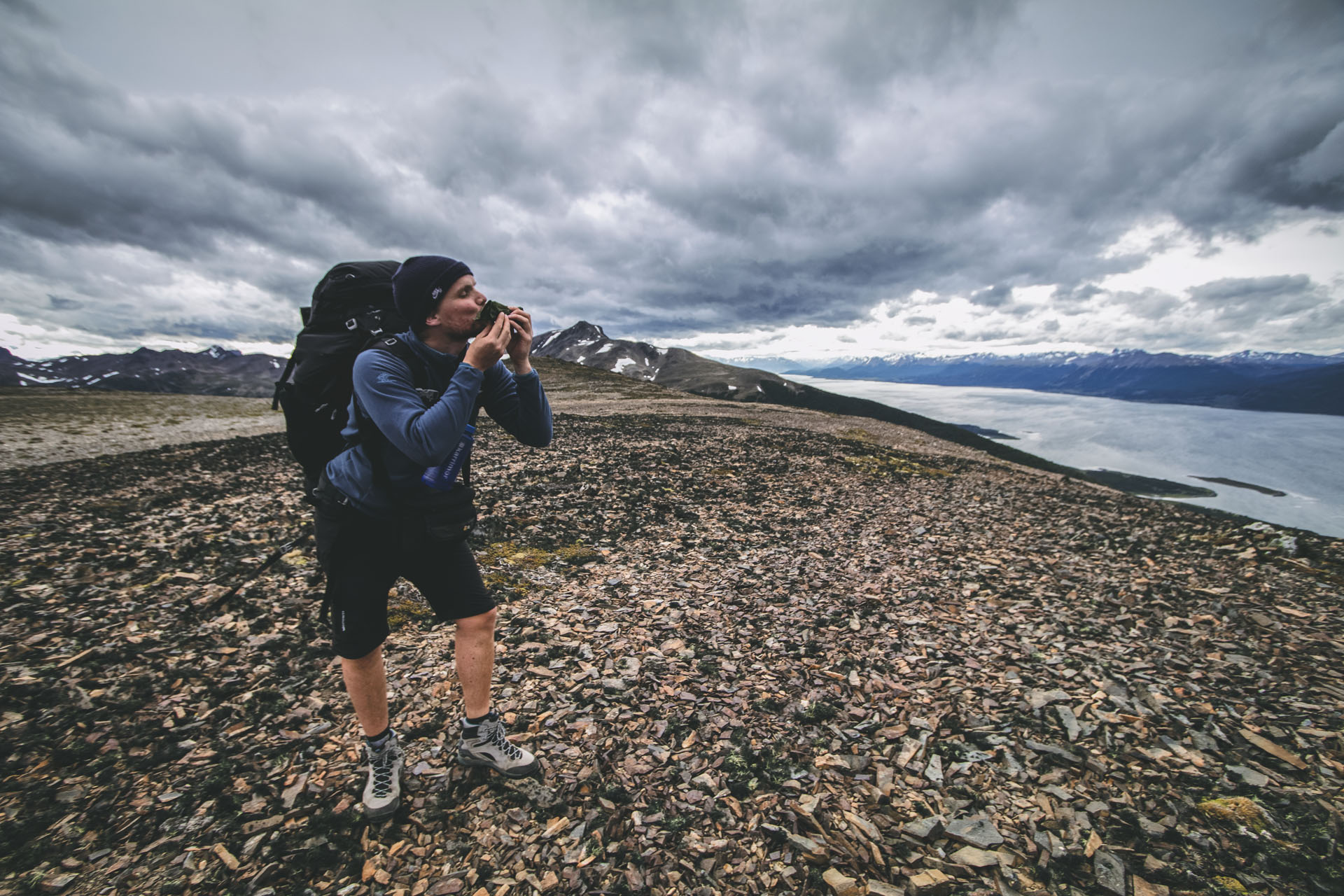 The sprawling mountain ridge was a nice change of pace after we ascent to the top Bandera Hill (Hito 5). 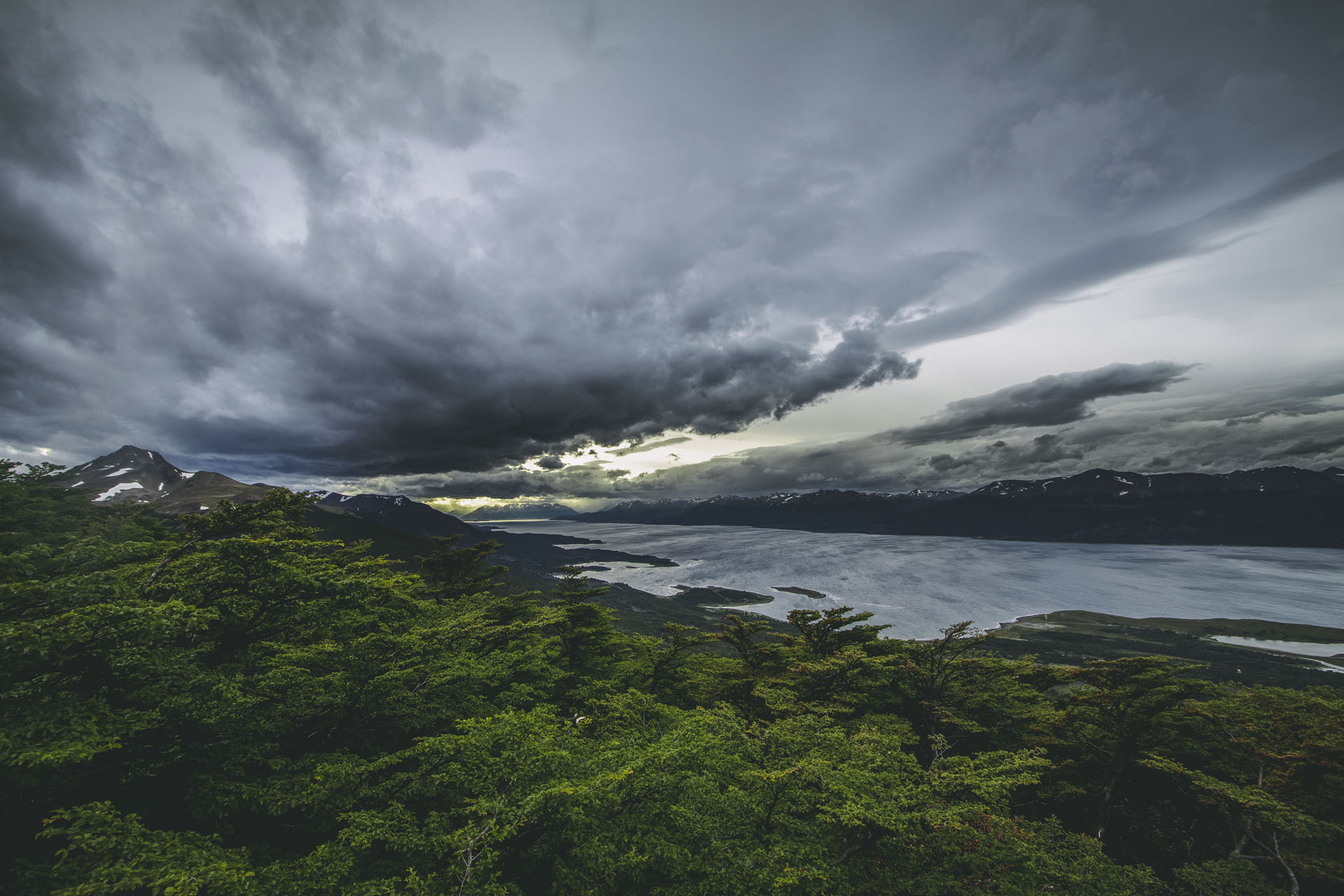 We meet Sebastián, an Argentinian hiker who was on the same trek. After a few kilometers, the path suddenly disappears (Hito 6). 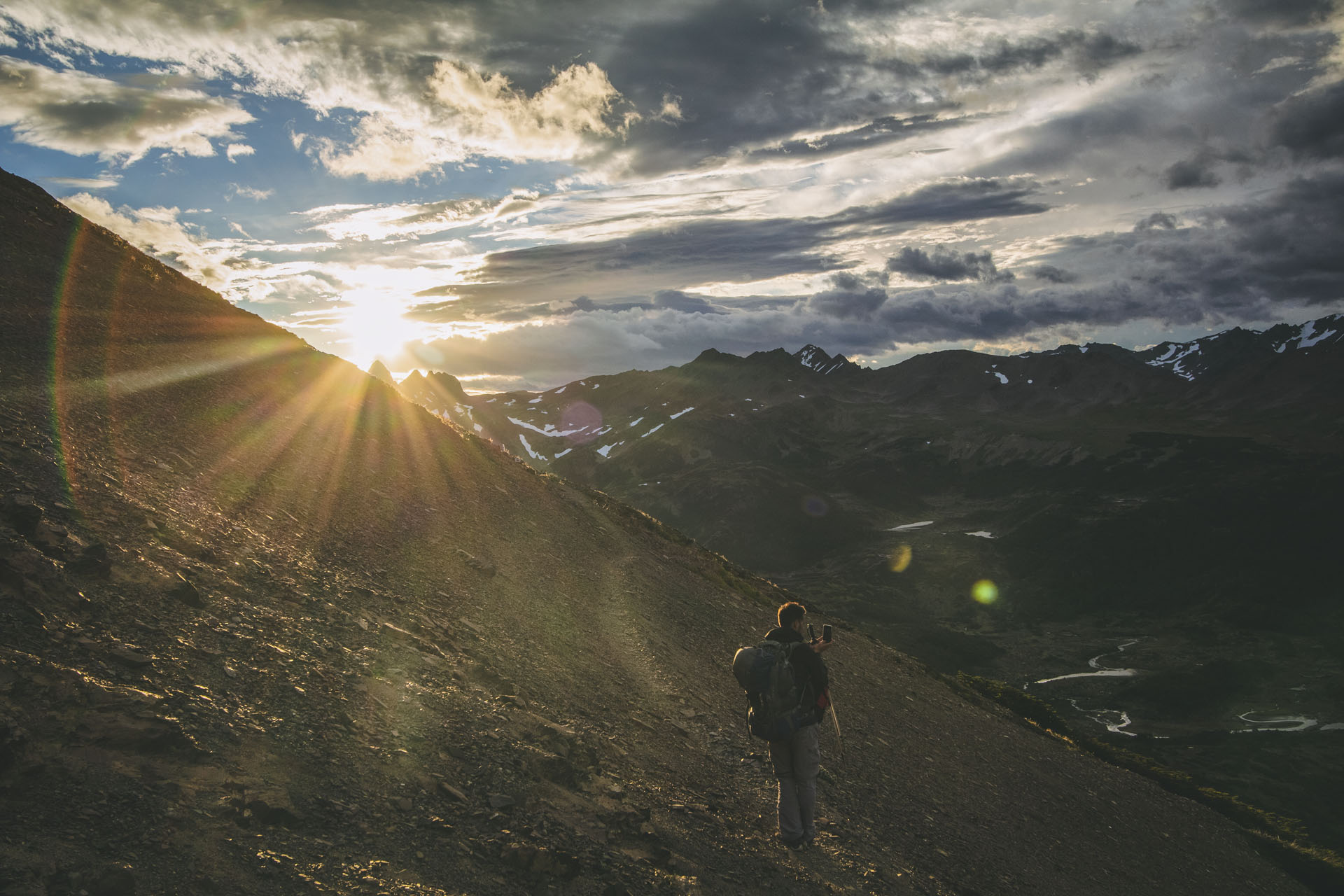 A landslide must have hit the trail a few months before our venture. It was a risky attempt to cross the landslide. After this section, the trail continues close to the forest line for another 1,5 hours (Hito 7 and 8). 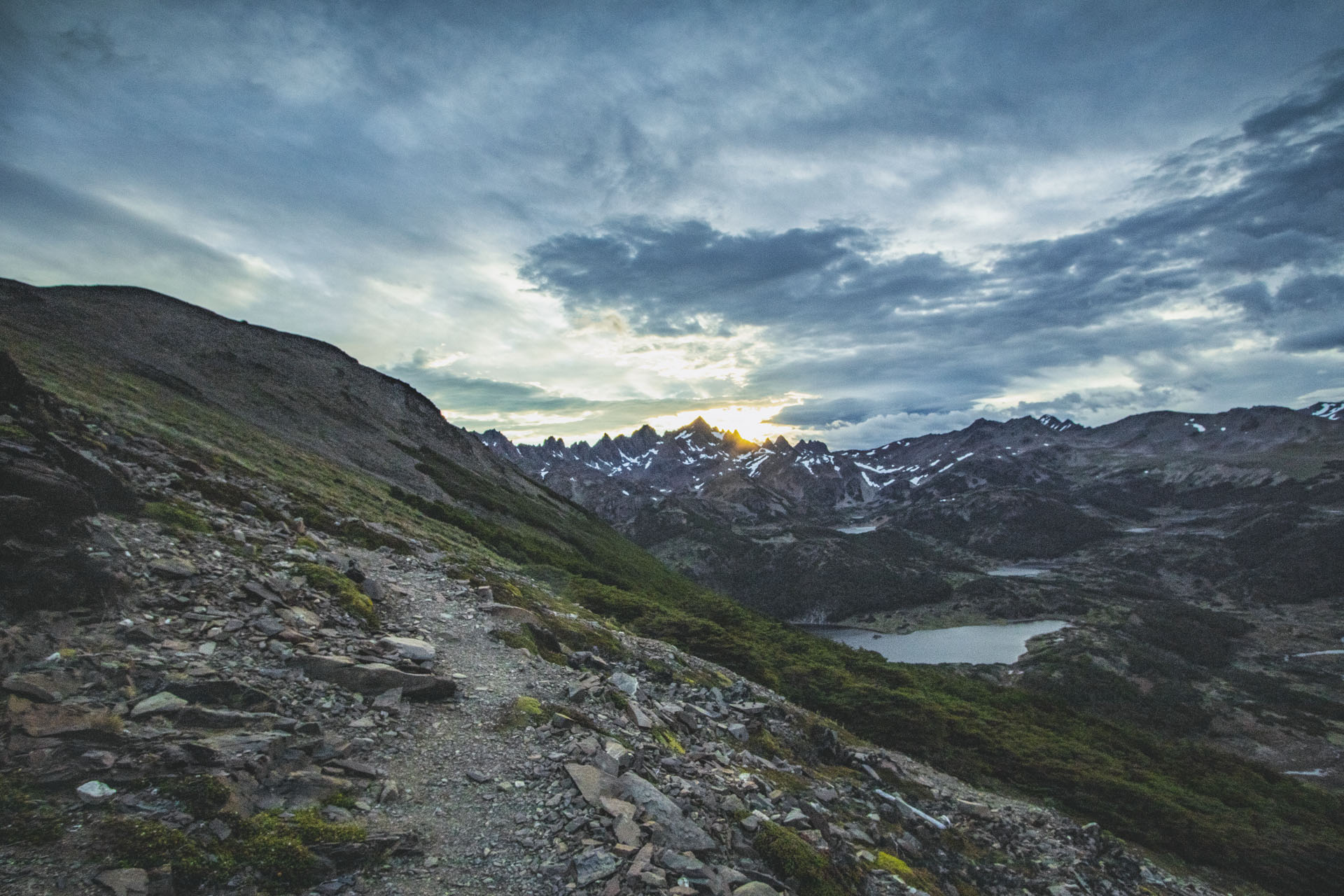 The descent to the Laguna del Salto is not too long, but still not easy. Over steep scree fields, we slip and jump down to the lake
(Hito 9). 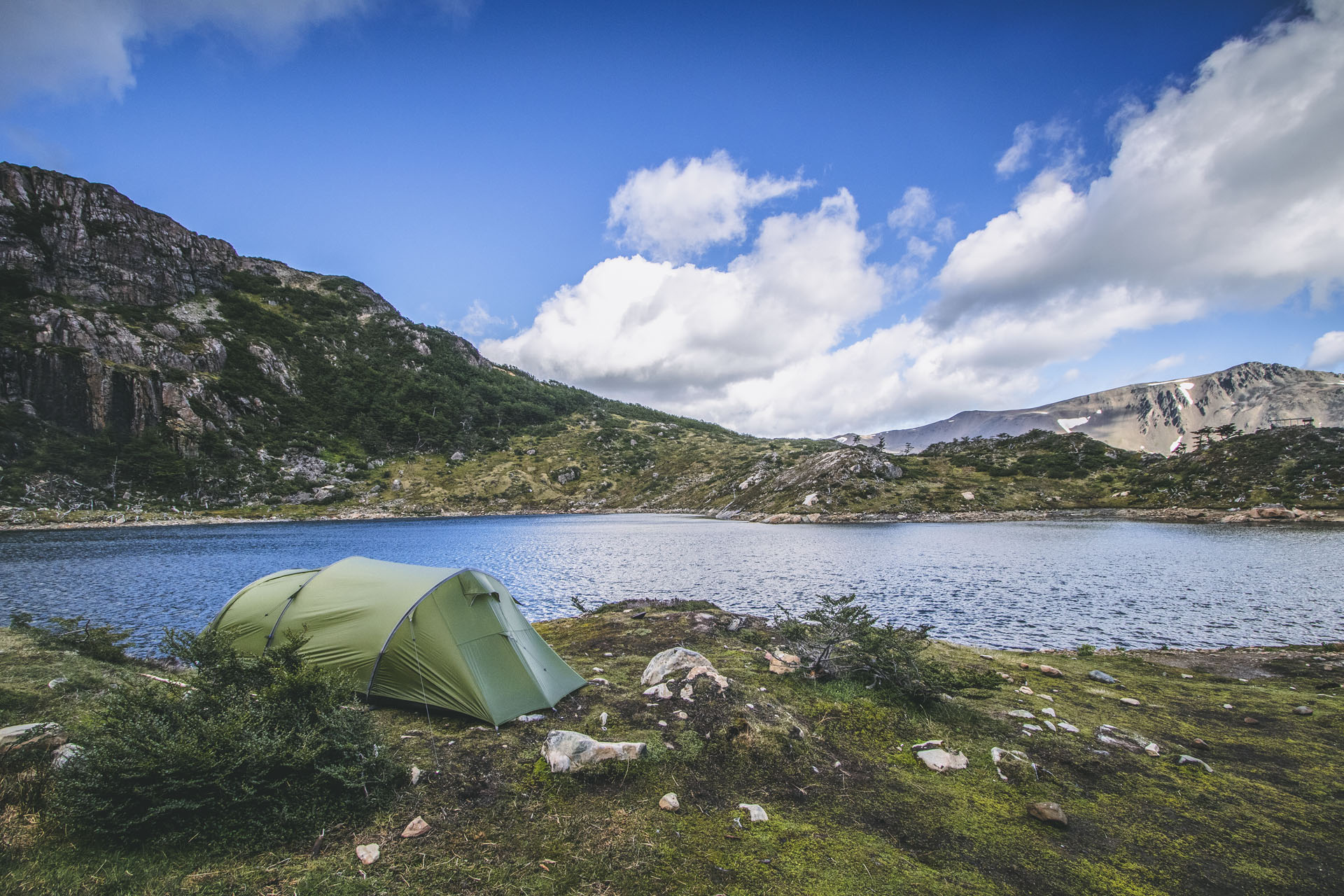 We pitch up our tent close to the shore of the gorgeous Laguna del Salto (Hito 10). After this strenuous stage, we have dinner and enjoy the impressive sunset over the Beagle Channel.

During the night we realize how silly the idea was to sleep right at the shore of the lake. Strong whirlwind and heavy gusts made it nearly impossible to sleep. Luckily we and our tent survived that night.

more on the Patagonia… 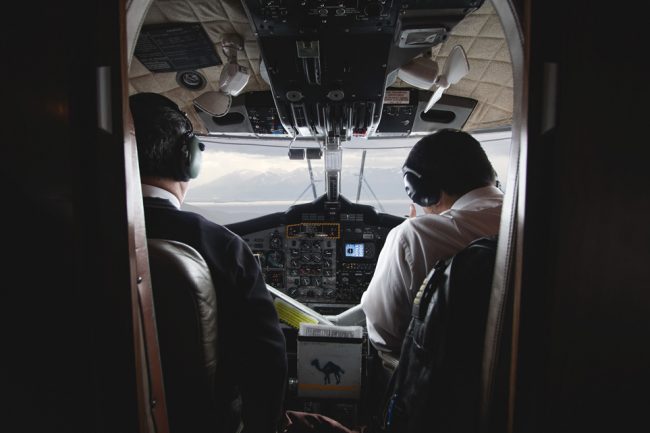 How to get to Patagonia